Skip to content
3 Weeks To The Marathon – Dealing With Maranoia

You’ve trained hard, followed your plan and now you’re just 3 weeks from your first marathon (or 2nd, or 5th). The excitement might be building up or the nerves kicking in, so how do you get through those final weeks of the taper? This is often the time when runners of all levels can be affected by a very common condition…..Maranoia. 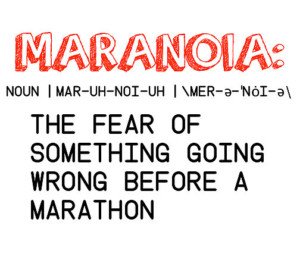 It’s important to tread carefully around sufferers and it’s useful to be aware of the symptoms – a sneeze that the sufferer believes will turn into pneumonia or the niggle that could turn into a crippling injury. These symptoms will likely get worse the closer to the race the sufferer gets. It’s all completely irrational though and will disappear after the race. Hopefully!

I don’t think it matters whether you’re about to do your 1st or 31st marathon, we all get a little nervous in the last few weeks before race day and fear all our hard work being undone somehow. There’s that sniffle or sneeze that we wouldn’t think anything of at any other time but we think is going to turn into something worse that will stop us running.

Tip: There’s no need to avoid contact with everyone else and load up on vitamins but we can make sure we eat well and get plenty rest and that sneeze will disappear.

In the same way we hear our shoulder pop or our knees crackle when we go to do something, we’re always going to feel other little twinges as we go about our daily life but this doesn’t mean anything. Twinges and little muscles aches are often known as ghost pains and they mainly come from our brains that have now become ultra sensitive from pre-race nerves.

Tip: Keep moving and try some gentle mobility exercises for the hips and back and you’ll be fine. Of course, if you do feel actual pain or something that is more than a dull ache then go see a physiotherapist. Avoid asking the question on social media otherwise you’ll get every diagnosis from “it’s nothing, run through it” to instant death!

Another symptom is the fear that something crazy will happen like filling a form in wrong when you go to registration and you not being allowed to race. There are many other symptoms of maranoia to mention but they all have one thing common – they’re utterly ridiculous! One example I heard last night was that for the Paris Marathon, where you need to have a medical certificate signed by your GP, one runner’s doctor forgot to put the date in so the runner had to do it themselves and were getting worried that this would be picked up on at registration!

The taper is all about priming your body ready for race day so it’s ok to allow yourself to rest a bit more without stopping running altogether. The rule is to reduce your mileage but maintain the intensity so there’s still plenty work to be done. The strange thing will be that some of the sessions you do now will feel ridiculously easy compared to the ‘big step up’ they seemed back at the start of your plan!

Enjoy the wind down!