I’m sure you all remember the iconic scene from the film Chariots of Fire with the group of young men running along the beach at St. Andrews. In case you’re not as old as me, I would imagine that you’re more familiar with the Mr Bean version from the opening ceremony at the London Olympics:

The Chariots of Fire Beach Race is a glorious opportunity for people to run along the West Sands beach at St. Andrews and re-enact the famous scene with one of the stipulations being everyone should wear white. This can be done by either wearing your own top or buy one of the event t-shirts.

This is a great event for everyone to take part regardless of age and ability. The distance is 5km and the opportunity is there to race it, run it or walk it. Allison and I entered the 2018 event for something different, have a bit of fun and also we’d seen that everyone gets a Fisher and Donaldson Fudge Doughnut and a bottle of beer from Eden Mill. Both are definitely worth running 5k for!

We arrived early for registration and get a good parking spot. The car park is on the grass close to the beach and was very well coordinated. We walked the short distance to registration to collect our race numbers and timing chip. Registration was very efficient and lots of people on hand to make sure everything runs smoothly. 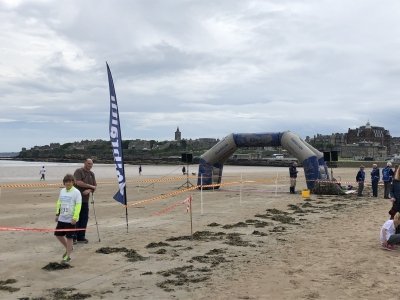 The timing chip is one of those ones that normally go on your shoe with plastic ties and it was good to see the organisers had dispensed with the ties to reduce waste and so we put our laces through them instead. There is the opportunity to run barefoot and so an ankle bracelet with the chip can be requested.

There was a kids race before the adult’s race and it appeared to be very busy. We had taken that opportunity to pay a visit to the loo while the queues would be shorter! We made our way down to the start area, ready for the off. 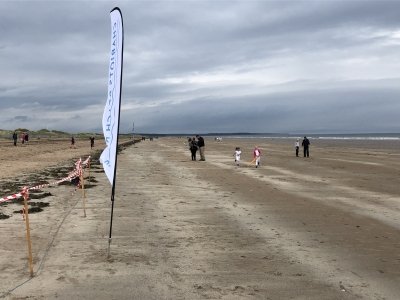 The turning point is way off in the distance

The route is a simple out and back along the sand. Most of the run is on sand where the tide would normally reach and is easy to run on with shoes. As we got closer to the turning point, we moved more onto the soft sand which was a lot harder! The challenge didn’t end there as soon as we turned to come back, we were straight into a headwind. When you run any race in Scotland, you’ll run into a headwind at some point! 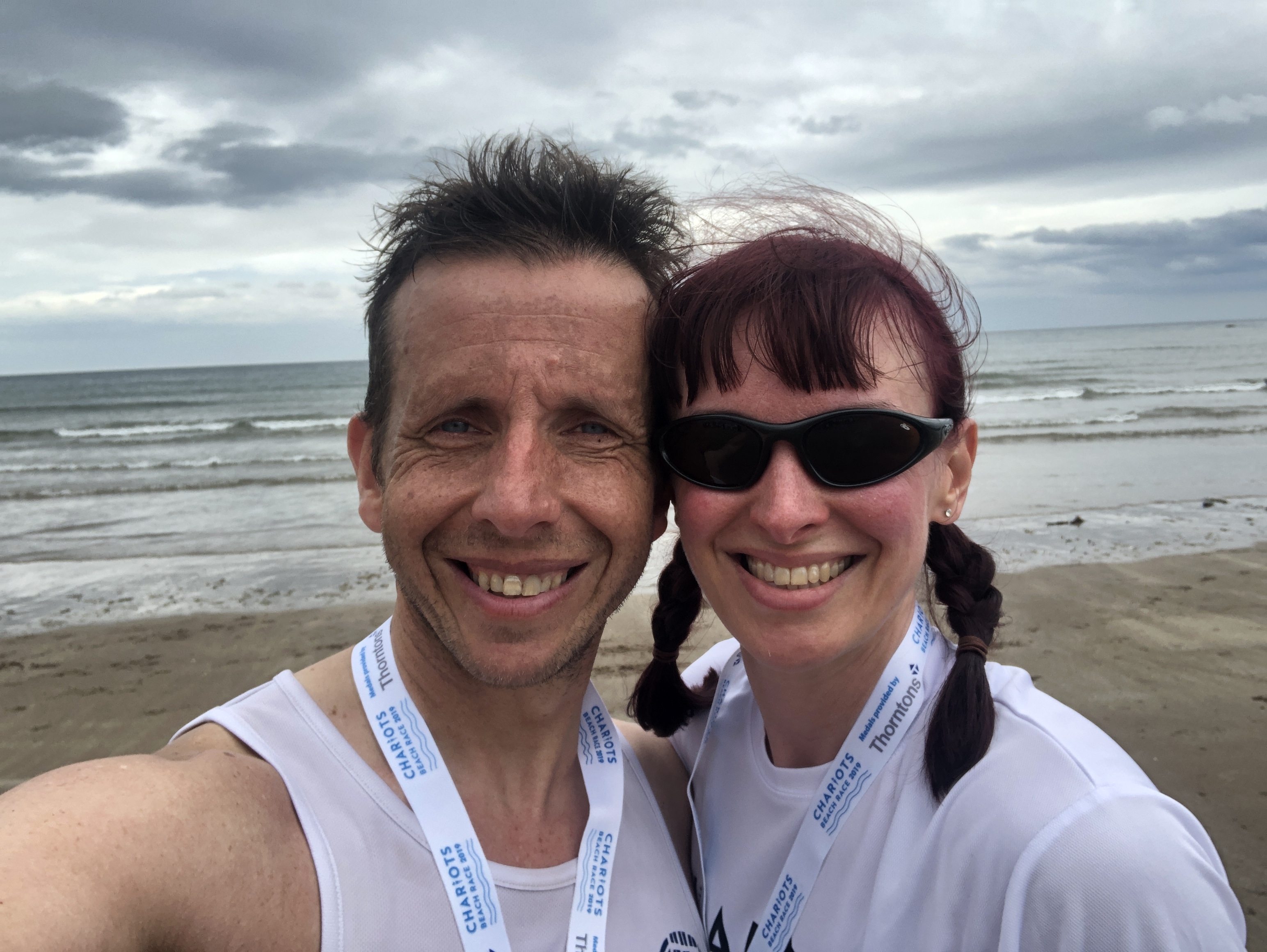 Allison and I post-race

The crowds swelled with 100-200m to the finish line so there was quite a buzz in that last surge to the finish as we did our best Eric Liddell impression. There was plenty of space beyond the finish to remove the chips from our laces, collect our medals, take some photos and head over to the registration tent to collect our doughnuts and beer. A great day!

This is a really good fun event. Running on sand isn’t easy especially when you hit the softer sand and combine it with the great Scottish weather but that’s all part of the challenge! The event is well supported and raises a lot of money for chosen charities. There were over 500 people took part this year. 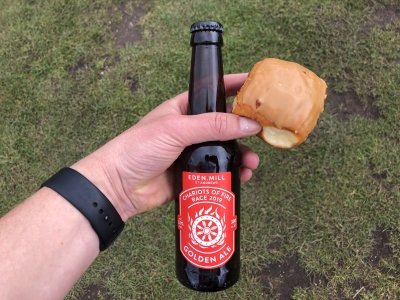 The medal along with the fudge doughnut and bottle of beer at the finish make it one of the best post-run rewards ever!

The not so good?

Nothing. The perfectionists might say the weather wasn’t great but you never get a still day at a beach in Scotland!

We entered on a whim in 2018 and now make it part of our race calendar. It’s a race I recommend to my Run Coaching clients for the challenge it provides and a fun break from their other runs. It’s nice to do something different from running on tarmac and has the same feel as parkrun. Good fun and a chance to make new friends. 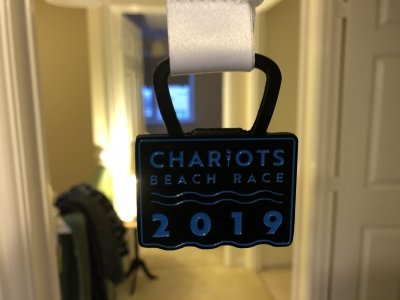 The medal that doubles as a bottle opener for your beer

There’s a slight irony in that this event is on a Sunday and Eric Liddell, the main character from the film connected with the scene on the beach, was a devout christian and famously refused to run in the heats of the 100m at the 1924 Paris Olympics after discovering they would be held on a Sunday.

I loved the labels specially created for the event. Beer was lovely too!

I would highly recommend this race to everyone. The 2020 event looks to be a good one as the race celebrates its 10th anniversary. 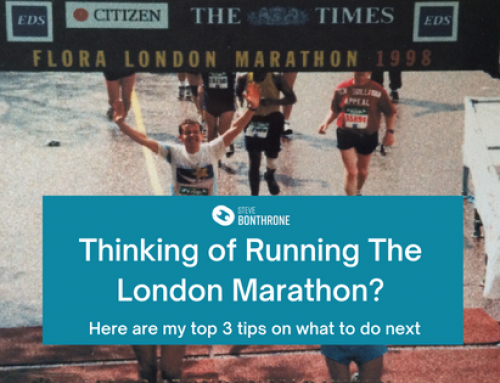 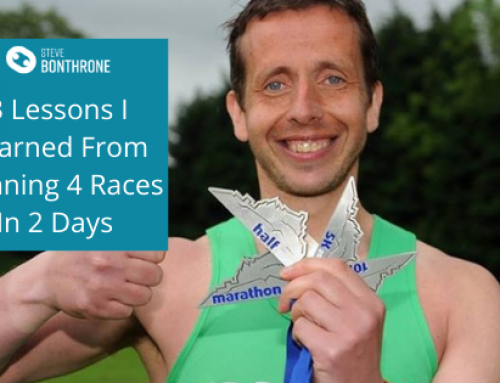 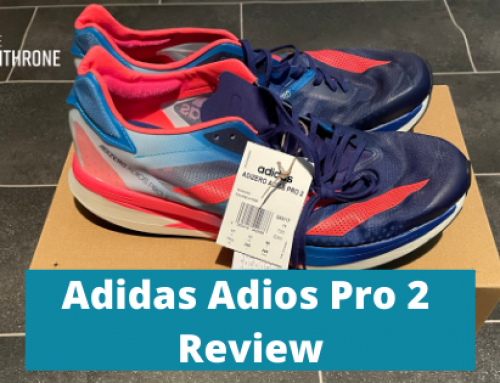 This website uses cookies to improve your experience while you navigate through the website. Out of these, the cookies that are categorized as necessary are stored on your browser as they are essential for the working of basic functionalities of the website. We also use third-party cookies that help us analyze and understand how you use this website. These cookies will be stored in your browser only with your consent. You also have the option to opt-out of these cookies. But opting out of some of these cookies may affect your browsing experience.
Necessary Always Enabled
Necessary cookies are absolutely essential for the website to function properly. These cookies ensure basic functionalities and security features of the website, anonymously.
Functional
Functional cookies help to perform certain functionalities like sharing the content of the website on social media platforms, collect feedbacks, and other third-party features.
Performance
Performance cookies are used to understand and analyze the key performance indexes of the website which helps in delivering a better user experience for the visitors.
Analytics
Analytical cookies are used to understand how visitors interact with the website. These cookies help provide information on metrics the number of visitors, bounce rate, traffic source, etc.
Advertisement
Advertisement cookies are used to provide visitors with relevant ads and marketing campaigns. These cookies track visitors across websites and collect information to provide customized ads.
Others
Other uncategorized cookies are those that are being analyzed and have not been classified into a category as yet.
SAVE & ACCEPT
Loading Comments...
Go to Top