It’s only taken me three weeks to get round to writing this but this is the first time I’ve ever written about a conference that I’ve been to that didn’t involve fitness or indeed running! What is #CMALive2017 I hear you ask? Let me explain.

#CMALive2017 is the annual conference of the Content Marketing Academy, a community of business people, companies and organisations seeking to improve how they market their businesses through content marketing. The CMA was created and developed by Chris Marr, the leading voice behind content marketing in the UK and a guy who’s very passionate and driven to help others achieve success as much as he does for himself.

I first learned about the CMA last August through a friend, Alasdair McGill, signed up for a trial they were offering at the time. It wasn’t the right time for me to join the Academy after it but I signed up for the conference. I normally only sign up for marathons that far ahead and so signing up for the conference was a major step for me and something I was already eagerly awaiting. I signed up (then joined the CMA in January) as I wanted to improve my marketing and also to learn from people in other sectors, everyone out with the fitness industry! CMA is about learning to change the way we market our businesses and trying to connect with our target market by answering the questions they may have rather than just trying to sell. After all, we connect better with people who are interested in us rather than those who try to flog us products or services in our faces without as much as saying hello.

I’ve become bored and cynical about the marketing advice in fitness where it’s mostly self-appointed gurus trying to fleece Personal Trainers and class instructors on how following their plan/formula will make them very successful. Some of the advice is very good but is overshadowed by the guru always wanting to be the centre of attention.

#CMALive2017 was held at The Hub in Edinburgh, a converted church if you haven’t been there and a fantastic venue for this kind of event. I arrived and was welcomed by a few of my fellow CMA members who I’m proud to call friends, and was guided through for breakfast of bacon rolls and fantastic coffee from Brew Lab, who had set up a pop-up coffee bar. I was already impressed and I hadn’t sat down yet! 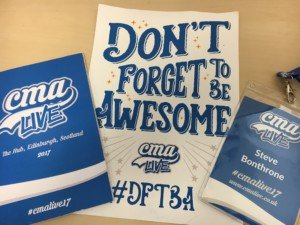 Don’t forget to be awesome!

What was fascinating throughout the two days was that we were listening to some fantastic speakers, experts in their fields, many of whom spoke about the same kind of subject but their approach to it was completely different from each other and I couldn’t help feel inspired. I headed for the train home after day one, already blown away not only by what I heard from the speakers but also by the amazing people I met. There was still another day to go! 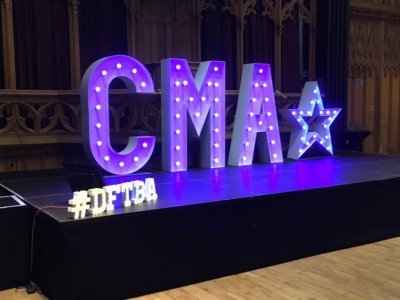 Day 2 was just as good, if not better. More great speakers interspersed with lightning talks by some people who have been on their journey with CMA for a while, some just into their second year but already enjoying greater success. Everyone was inspiring in their own right and I made lots of notes that I’ll be reflecting on when I’m on holiday and get the chance to sit down and plan the year ahead. I do that whilst also lying on the sun lounger by the pool and enjoying a cold beer. I’m pretty good at multi-tasking! The one thing that stood out for me was from the keynote speaker, Marcus Sheridan, who among other things, said that it wasn’t what all the speakers said, it’s what we heard that would make the difference. He also spoke about owning your story, which is the first time I’ve ever been to an event and heard anyone encourage the individual and their story rather than tell everyone to do the same thing and stick to the magic formula. 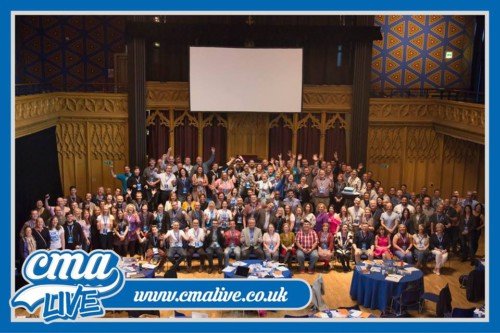 #CMALive2017 is easily the best event I’ve ever been to, and also the wonderful CMA community to inspire me to grow the business differently compared to what I’ve done before. It wasn’t just the conference but also the social events that followed on each day where we were able to have a beer and chat with the word class speakers we’d just been listening to!

I’m looking forward to the coming months and putting into practice all the stuff I learned from #CMALive2017 as well as the ongoing education as part of the CMA. If you’re a business owner and looking for inspiration to help grow your business then I would highly recommend going the CMA and sign up for #CMALive2018. It’s given me a lot more confidence to try things I wouldn’t have done before and you are surrounded by amazing people to learn from.