The Edinburgh Marathon Festival (EMF) holds a lot of great memories for me. I’ve done the marathon a few times and last week I was back to do the Edinburgh Half Marathon.

Nothing will beat 2014 when I ran all 4 races and I became the poster boy but this was going to be a completely different experience.

This felt like a new race to me as the start had moved across Edinburgh to be beside the University and not far from the Castle. It used to be a standing joke on social media that EMF stood for ‘Edinburgh Merely Features’. Harsh but fair given that in the Half Marathon and Marathon, the route started away from the centre and took you out of Edinburgh without seeing any of the city itself.

Full credit to the organisers for addressing this issue and not only does it take the runners through Princes Street Gardens, the Royal Mile and Holyrood Park, passing many of the landmarks that Edinburgh is known for, it has also enhanced the race’s claim to be the fastest in the UK with a couple of downhill stretches in the first mile and flat the rest of the way.

The switch also enhances the atmosphere before the race and gives it a ‘big city’ event more than it did before. Everything is clearly marked out with plenty of signs and lots of marshals guiding people in the right direction as the baggage lorries are scattered in different locations depending on your race number. 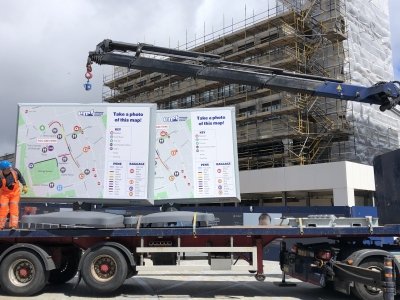 The signs for the runners before the start. Photo was taken after the race and the signs were being removed

The first couple of miles went through the streets, crossing over the Royal Mile, down onto The Mound and a right into Princes Street Gardens. The section through the gardens was a bit compact but then it opened out a bit as we headed back round onto the Royal Mile and downhill towards Holyrood Park, passing the Scottish Parliament and Holyrood House.

From there, we ran along Queens Drive, in the shadows of Arthur’s Seat and began the journey out of Edinburgh. It’s really nice to have some scenery to admire during a race and the first 3 miles were as good as I’ve seen in any race. I tried hard to avoid zigzagging my way through other runners as this only serves to tire you out quicker and pay for it later in the race. 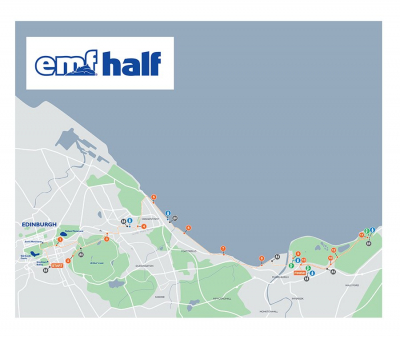 The next couple of miles were a bit non-descript really. We passed a lot of houses as we headed out towards Portobello and the promenade, where we would run for the next few miles. The race was starting to spread out now so made it easier to have some space to run into.

The crowds were brilliant through the first few miles before dying down a bit until we got to the promenade and then it picked back up again. There were lots of volunteers representing several charities and lots of other spectators cheering everyone as they went through. The weather wasn’t the best and so it was brilliant to see so many people out along the course.

When you come through into Musselburgh at mile 9, you start to head onto the road by the racecourse where the runners are heading further out along the coast and there are runners on the other side of the road heading back towards the finish. Along this stretch, the atmosphere is amazing as there are lots of people cheering everyone on and there’s good support from fellow runners going either way.

The sad thing is, you’ve got a couple of miles to go to the turning point. The atmosphere is still pretty good here although the further east you go, the number of spectators diminish as the only road to get there is the one the runners are on. I had kept ploughing on but things picked up as soon as the turning point came into view. I have developed a little pirouette at a dead turn that allows me to take that tight turn without slowing down and once I got round that, I instantly felt stronger and started to pick the pace up.

When I say “picked up the pace”, what I mean was that I didn’t slow down as we ran straight into a head wind as soon as we turned. Spare a thought for the marathon runners who would’ve had that for the best part of 8 miles! I got through the next water station, took a drink, poured the rest down the back of my neck, felt refreshed and then it was work hard to the finish.

The crowds picked up again as we got back into Musselburgh. I had been looking out for runners I knew on the other side as they were heading out but sadly I only saw one friend, Julie, the rest I was too busy focusing on getting to the finish. When we came back onto the road parallel to the racecourse, I felt stronger as I knew I wasn’t far away from the finish. The last mile is just a wall of noise as the crowds get bigger. One final turn and it was onto the mats and final effort to the finish line. I pushed it hard and was delighted to finish. I hadn’t hit my target of sub 1:30 but I was happy all the same.

The new start point makes it feel an entirely different race from before. It feels like it’s in Edinburgh rather than you just happen to be in Edinburgh for the start. Brilliant atmosphere along the scenic early miles and towards the finish when you need it the most.

Another good thing is that EMF prides itself on being a zero waste event. This is evident from plenty of bins for recycling empty water bottles during the races. The great thing was the little EMF branded box the runners were handed at the finish. These contained the t-shirt, foil blanket and sachets of hot and cold gels, tartan on the inside and a nice little motivational quote. The medal was pretty good, complete with additional key ring to carry with you while the medal hangs on the wall.

The Not So Good

It’s difficult to say here without being too harsh. Certainly there are parts of the course that are a bit dull and with no atmosphere but then the locations where these bits are, the only road to get there is the one that the runners are on.

The one gripe I would have is there wasn’t any horn or any music to start the race and get the runners going as they get on their way. One minute we were standing and the next we were moving forward and starting to run without an obvious start to the race.

A great improvement on the last time I ran here. Would I recommend it? Yes, definitely. The conditions were tough and the headwind in the last couple of miles (last 8 for the marathon runners) create a good challenge.

The organisers have taken a fast route and made it even faster with the downhill sections early on.

Entries are already open for 2020