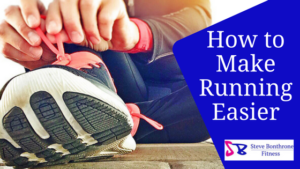 When I first started running coaching groups, people would tell me that they weren’t quick enough to join or that they didn’t want to hold everyone else back even though they didn’t know anything about the group or about those who were coming. That was the inspiration for me to set up my 0-5k in 5 Weeks coaching group a few years ago. If the group was starting everyone from scratch and nobody was expected to keep up with anyone else, it would be easier to attract more people.

In the years since starting the group, I’ve come to notice from the people who have joined or those I’ve done one to one training with or those with a bit more running experience is that they all struggle with one thing – pacing. Many people ask me for tips on how to breathe when running and while in and out seems the obvious answer, the real answer is that the intensity of the run is too high for them.

The biggest tip I can give anyone to help make running easier for them is to run to how they want to feel. It’s the aspect that underpins my 0-5k AND my Run Faster groups and is completely ignored by everyone else. We can become fixated on trying to maintain a certain pace thanks to Strava but we seldom think about how we want a run to feel.

Couch to 5k is a good idea but, to me, should never take 9 weeks to complete. It’s built around running for a certain period of time then walk for another period of time but the trouble there is that if we are asked to run for 2 minutes then we will most likely run our fastest knowing that we get to stop after 2 minutes and walk for a bit.

What if we decided to make our run feel easy and run for longer than 2 minutes and maybe ran for 10 without stopping?

This is talking about beginners but the same rule applies to more regular runners. Many runners will try to aim for a certain pace based on what they’ve seen on Strava from previous runs and can often be guilty of trying to make each run a Personal Best but the trouble there is that cannot happen every time and a bad run can affect their morale if they’re nowhere near where they should be.

These same runners will also admit that one of their best runs came when they didn’t look at their watch and were maybe chatting to another person they were running with or something else. This comes back to running to a particular feeling as it would be impossible to hold down a conversation if you were running at a high intensity.

What the mind believes

Running to how you feel isn’t easy and comes with practice. You’ll probably have seen the quote “What the mind believes and can conceive, the body will achieve” by Napoleon Hill and this can be the guide to a better run. Firstly, think about the kind of run you want, how you want it to feel for you then go and create it. You never forget a feeling and so the body will do exactly what you set out in your mind.

Go try it. Think of how you want a run to feel and go and see what happens. The time/pace isn’t important as that can be improved in training. Let me know how you get on