Monday is one of my favourite days. It’s when I get to play in the kitchen and cook a whole lot of food. I cook most days but today, I had a lot on the menu. Here is my recipe collection

On today’s menu/to do list, I made a Spanish Chicken and Chorizo Stew, a batch of Corona Chicken, Chocolate Chip Cookies and Chocolate Truffles. #0d1267

I started with the most important one – the Chocolate Chip Cookies. When I make something and it turns out quite nice, I make it every week until we get bored. 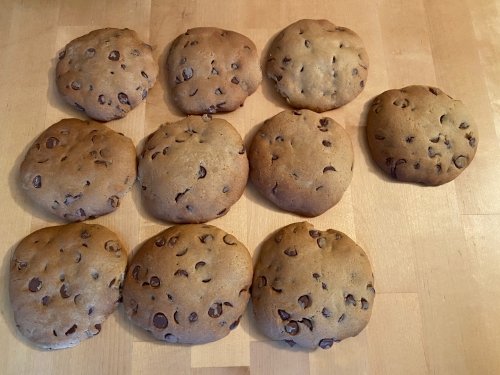 I got back from my run at 6am and after my shower, I got cracking into making them. I wanted to make them for Allison so she had a play piece to take to school when she left at 7.40am.

Allison’s my wife and she’s a school teacher.

I found this recipe from BBC Good Food. I’d originally followed a Nigella Lawson recipe but that needs way more flour than is necessary. And sugar. Indeed with the BBC recipe, I only use around 80g of brown sugar as they’re sweet enough.

I use a dessert spoon to scoop some mix then roll them in my hands before putting them on the baking tray and flattening them. They don’t look much but they do increase in size in the oven so be careful about making them too big.

Next up was the Spanish Chicken and Chorizo Stew. In the summer, I made a Quinoa Lunchbox with lots of veggies thrown in but as it was coming into colder weather, I wanted something that was healthy, easy to make and not too many ingredients. I want to encourage people to try cooking at home and feel if a dish has too many ingredients, that might put them off. I found the recipe from the Delia Smith website. 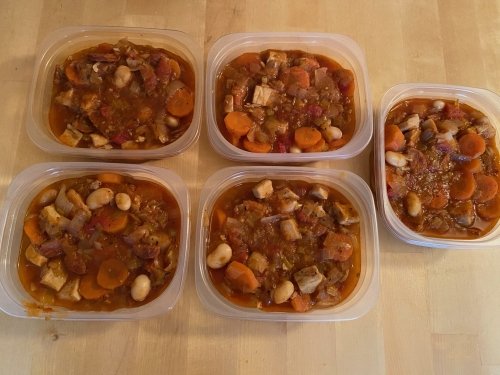 The thing I love about cooking these kind of dishes is getting to know the process so I’m constantly doing things. For this, I use frozen diced chicken from Aldi. It’s sooo much easier.

I would recommend peeling and chopping the onion, leek and carrots first as that takes the most time of all the prep. While the chicken is cooking, I would recommend putting it on a low heat as if it’s too high, it’ll stick to the bottom of the pot. While you’re cooking the veg, that’s when to chop up the garlic and chorizo then get the beans, the chopped tomatoes and chicken stock ready. You can also add a dash of red wine to enhance the flavour of the sauce.

Once it’s all in the pot cooking, I usually like to clean up the chopping board, the knife etc so you don’t have a massive pile of dishes at the end. In my case, I had another batch to make for Allison and her lunches so I started prepping the veg etc so they were ready to go.

The thing I love about this dish is that there’s a lot of veg, a lot of flavour and you’ll want to lick the plate so probably best to have some rice with it, or a slice of good quality bread. I make my own bread from the leftover dough from making pizzas every Saturday.

While that was cooking, I started to make the Chocolate Truffles. 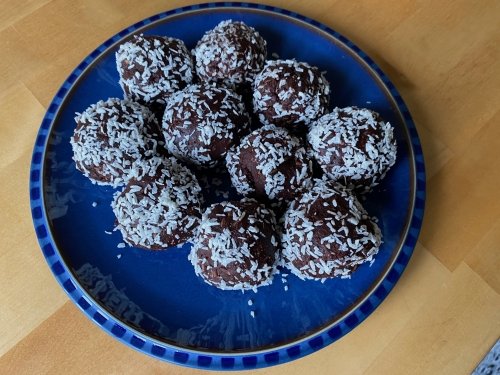 I make these as a treat around this time every year. They’re amazing but the way I make them, they’re less sweet and so only have one at a time. I followed this recipe from Gill at Small City Big Personality.

I use dark chocolate, 75%+ cocoa, instead of milk chocolate and which is why you only really want one at a time. You can use sherry if you don’t have rum. Like with the cookies, I also used significantly less sugar (80g instead of 200g icing sugar) and get the sweetness from the sherry instead.

I think the dark chocolate gives them a much nicer flavour and works better with the rum or sherry. Once you’ve mixed the ingredients together, put in a tub with a lid and stick in the fridge. When you get the recipe right to your taste, you won’t buy truffles from a shop ever again!

I’ve no idea how many the recipe is supposed to make. I suppose it depends on how big or small you make them. Insert your own joke about how big you like your balls! Once the ingredients are mixed, stick it in the fridge to cool before rolling them into the shape and covering in desiccated coconut.

Final dish of the day was the Corona Chicken. I used a whole fresh chicken for this and put it in the oven before I started to make the stew. Brushing the chicken with olive oil and sprinkle some paprika or other seasoning before putting it in the oven can add to the flavour. 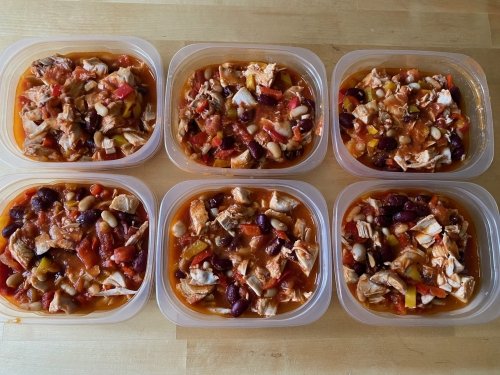 I first made this dish early into lockdown back in March, hence the name, as I wanted us to have some food in the freezer and limit the frequency of going to the shops.

The chicken takes a couple of hours to cook, hence the reason for putting that in the oven first. I put a chilli pepper in it so it gives a bit of a kick, which is pretty good on a cold winter’s evening.

With this dish, you can literally put whatever you want in it. I put in a red pepper and either a green or yellow pepper, kidney beans and cannellini beans but you can also add more veg if you want.

Like with the stew, this dish tastes even better when cooked on a low heat and let sit for a while after it’s cooked. You have to leave this one for a while anyway while the chicken cools enough to take the meat off and add it to the sauce. You could make it without chicken and add more beans or veggies instead.

The dishes themselves aren’t tricky to make and you don’t have to make them all at the same time. The biggest time saver is knowing your process so while one part is cooking, you prep something else and so on.

Another massive time saver, and stress saver, is to wash up as you go. While the big dishes take around 20 minutes to cook, that’s a good time to wash up everything. This means that by the time they’re ready and you’ve served them up, the only dish you have left to wash is the pot itself.

Some might question a Personal Trainer sharing recipes for things like Chocolate Chip Cookies and Chocolate Truffles but I believe in having a little of what you enjoy from time to time. If you make your main meals healthy and nutritious like the Corona Chicken and the Spanish Chicken, then a sweet thing occasionally can be a nice reward.

Give some of these recipes a go and if you have any questions, just let me know. Once you’ve made them, why not try tweaking them the next time, add some of your favourite ingredients and make it your own recipe?

If you do, let me know what you do with them. I’d love to try out your version :-)