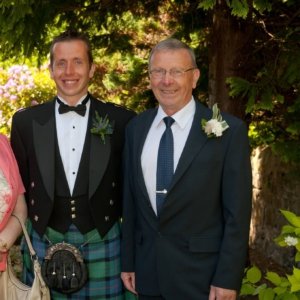 It is good to take a step back once in a while, not only to appreciate how far you’ve come but also to celebrate and thank those who have helped you get to where you are and today, I could name a whole number of people who have been invaluable on my journey and I’m going to take the time to thank my greatest inspiration – my Dad. I am doing this today as this would’ve been his 84th birthday.

He was a very special man, took the time to speak to and get to know lots of people which, as a result, he couldn’t go anywhere without bumping into someone he knew and would get a row from my mum as he would always be late home. It got to the stage where my mum would get asked if she was Harry’s wife to which she would reply “Why, what’s he done?” before deciding how to answer the original question.

Growing up, he was always taking my brother and I outside to play football in the garden and encourage us to be active. He was a big kid at heart and I think any activity he got us into doing, whether it was football  or sledging in the snow, he did because he wanted to play too. 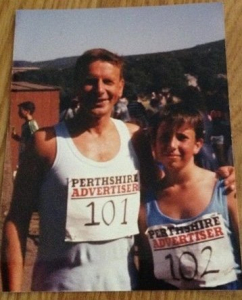 Dad and I before the Fun Run

He got me into running and took me along to the inaugural Fair City Fun Run. His ethos was always to enjoy the taking part rather than be super competitive. When I started business as a Personal Trainer, he would go around telling people about me and handing out business cards! He was always encouraging people to exercise to become better rather than try to be perfect, which is the ethos I have taken forward and encourage my clients to do.

He never pressured us about careers when we were growing up and always wanted us to be happy, doing the things we wanted to do. I think he would’ve loved to have been a PT himself had the opportunities been around when he was growing up and instead, coached local football teams to great success alongside his day job in Marks and Spencer. He was active throughout his life, walked everywhere and never owned a car.

I once read an article in a magazine suggesting that men should get to know their Dads as men as they will ultimately turn out like them and be useful to know of any health issues etc. I started to meet my Dad every week for coffee, a shared passion, and it was great to get to know more about him, his upbringing and just all the little things he would unlikely have told us otherwise. It was easily the best thing I ever did and would highly recommend it to other men to do the same.

I am thankful that I have inherited many of his traits from his positive outlook on life and the desire to help others and encourage them to get fit and I hope I can follow him by continuing to keep fit into my 70’s as he did.

My greatest respect for this man came when he was diagnosed with terminal cancer in 2013 and all he spoke about was how he had enjoyed a great life, did everything he wanted to do, was proud of all of us and that he wanted his funeral to be a celebration of his life rather than any sadness. It is remarkable he spoke like that given he only discovered he had cancer less than 24 hrs previously.

I continue to chat to him every Sunday in my training runs, much like I used to when I met him for coffee, share my news with him and always thank him for everything he taught me and for how my life has turned out. I couldn’t ask for more.

Dad, thank you very much for everything and it makes me proud when people tell me I’m just like you.

Who has been your greatest influence in life? Who would you thank for helping you get to where you are today?